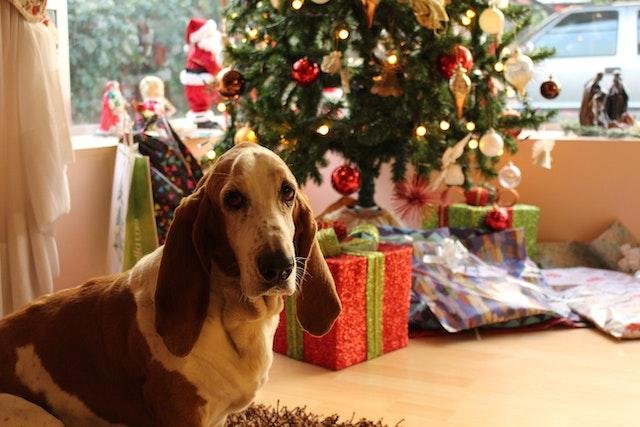 A wonderfully funny Christmas story all the way from Sweden by author Jon Buscall and his wonderful Bassett Hounds.

Last Christmas Aggie, the resident pack leader at Kennel Björkwood in Sweden, found herself miraculously alone in the kitchen.

I’d plucked up courage and donned my thickest jumper to venture out into -10°C for a a walk in the woods with the other woofs. Aggie, suffering from some feigned minor ailment or other, had persuaded me to leave her behind in the comfort of her bed. Despite  often eliciting a glowing “She walks extremely well,” from judges in the show ring, Agsie is in fact the laziest basset hound in Sweden and will do anything to avoid a walk – much to my frequent frustration.

So off I went with the other woofs and headed for the forest. Meanwhile, Agsie was left alone in the house with Mr Teen, who tends to be more interested in computer games than minding woofs.

Amazingly she managed to silently prise open the woof-gate that during the rest of the year always keeps the woofs out of the kitchen.

No doubt as she padded around the kitchen hoovering up the floor she found a crumb or two of something tasty. But I can only imagine her pleasure when she spotted what was on the counter: a kilo of frozen beef wrapped in a plastic bag that my wife was planning to use for spaghetti bolognese.

What happened next is anyone’s guess. If you’ve never owned a basset you might think of them as rather vertically challenged. Yes, they are rather short legged. But it never ceases to amaze me how a basset can suddenly turn into a counter-surfer the moment they’re alone with a tasty morsel or two in sight.

When I returned from walking the woofs I dried the snow off them and got them settled then went to check on Agsie. At this point in the story I wasn’t aware that there had actually been any meat thawing in the kitchen.

“Has she been okay?” I asked Mr Teen.

I didn’t notice it immediately. Aggie was fast asleep, her blanket wrapped around her, snoring sweetly away. To look at her there was no indication of what she had been up to.

Then I saw the plastic bag. Interwoven with her blanket.

“What’s this?” I bellowed, picking it up to have a look. Neither Aggie nor Mr Teen responded.

“Has Aggie been in the kitchen?”

“NO!” yelled Mr Teen, irritated that I’d deigned to interrupt Counter-Destroy-And-Strike-Everyone-or-Whatever-it-is he spends his life doing.

I prodded Agsie. “You all right, girl?”

She woke up, rolled on her back and gave me the cue to rub her belly. So I did. She seemed her usual self so I didn’t think more about it. Until my wife got back.

“Where’s the minced beef?” Margrét wanted to know. “I’ve got to get the dinner on. Eirikur and Eygló will be here in an hour.”

“Isn’t it in the fridge?” I ventured.

And that was when the penny dropped. Aggie had scoffed the lot…

Much to my wife’s dismay Aggie showed no averse signs to wolfing down a kilo of frozen minced beef and part of a freezer bag. In fact the next morning she was decidedly chipper and accompanied me on a 5 kilometre walk through the forest with the rest of the Björkwood pack. Nevertheless, she was not let anywhere near our Swedish Christmas dinner on December 24. She was banished to the dog room by my wife – just as she will be this year!

About the author: Jon Buscall is a Communications Strategist based in Sweden. He is owned by four  bassets.

If you enjoyed this post please help an ageing abandoned basset and donate to House of Puddles.

Are you having a bad day with your dog? Does everything they do drive you barking mad? Here are [...]

Tips to improve bath time for you and your dog

Can I train my dog in 5 minutes a day?

Often I am asked how long someone should be training their dog each day. Should it be 5 minutes? [...]

How to stop your dog jumping up?

Why do dogs jump up? It can be such a dog problem and starts from when they are just [...]