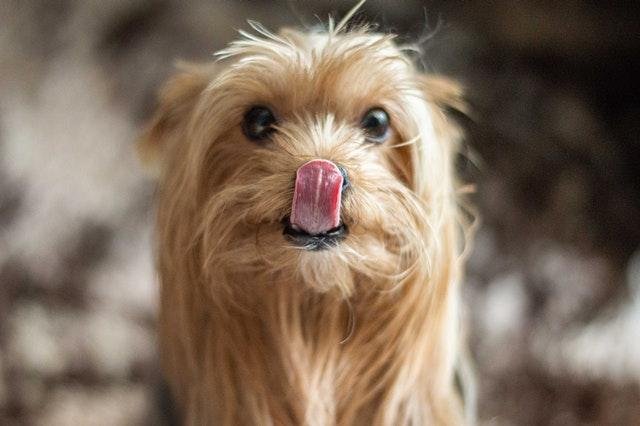 Excessive Licking: How Can I Deal with This Aspect

If you are a dog owner or have friends with dogs, you probably went through the part in which you got licked by the dog. Some think this is cute and it can be, as long as it is not exaggerated. But, some dog owners have to face a pooch that enjoys licking them way too much. Why do dogs lick us? And what can be done if we’re dealing with excessive licking?

When getting a dog, you should expect for it to manifest its states in a different way than humans. So, if humans manifest their affection through hugs and kisses, dogs will do otherwise. In other words, you should not be upset if your dog licks your hands after it eats the meal you served it or after a nice walk. But gratitude and appreciation are not the only reasons dog lick us. If you are a dog owner that has a dog with licking problems at home, you may want to find out the cause behind it and how to make it stop.

Dogs are creatures that rely on their senses a lot. Their taste is one of them, something you can see in your pup from a very early age. Your dog will like and try to pick up with its mouth things that appear to be interesting. So, if your dog is licking you after you’ve been cooking or eating, for example, it does it because you smell and taste good. Dogs have very sensitive noses and tongues, easily sensing small food particles that escape our eyesight.

Also, dogs enjoy licking the salt that forms on our skin when we sweat. Again, we won’t see it, but our dogs will be able to taste it. You don’t have to sweat a lot in order to taste salty and it’s the main reason dogs lick us, especially during the warm season.

It’s a form of communication

It may be hard to believe, but dogs use licking as a way to communicate with other dogs and with humans as well. Dogs also lick other dogs if they want to transmit particular messages, like the desire to become friends, as a submission sign to a dominant dog, or when they are hungry. So, if the dog is licking you in an energetic and insistent manner, stop and take a look around. Your dog may be telling you that it’s food bowl is empty and it’s dinner time.

Of course, it’s not just food that may be missing. The water bowl may be empty, the door that allows it to go outside or provides access to its bed may be closed, or the dog simply needs anything. In this case, licking is a way your dog signals you that something is missing, so check out to see what it is by allowing your dog to guide you.

It is a way to show affection

Our dogs can’t hug us or tell us how much we mean to them. They use their own form of communication and body language when they want to tell us something. We just need to learn how to read the kind of messages they transmit. Usually, when dogs lick their owners or family members, they do it out of affection. Yes, your dog loves you a lot and it shows you this by licking you, whether it’s about licking your hands, legs, face, or any other part of the body that may be available.

Still, such signs of affection maybe a little too much for some of us. A bit of licking can be accepted, but some dogs tend to do it too much and too often. How can we change this and save us from being licked all the time? When your dog starts licking you, just get up and go to another room of the house. Do this repeatedly until the behavior stops. The dog will learn that licking will make you leave, which is something it does not want.

Licking can be compulsive as well

There are dogs that tend to lick a particular item or area over and over again. It’s like they can’t stop or appear to feel the need to do it repeatedly. Also, this kind of licking is insistent at the same time. Check out the state of the dog during these episodes, as the dog can be scared or stressed, licking is a way to reduce a negative state and find some sort of comfort. If this is the case, you may want to seek help for your dog. When licking is triggered by something that is stressing your dog or scares it too much, it can turn into an obsessive behavior or fuel anxiety. Thus, it is not a method that brings comfort, but a habit that will become problematic in time.

Now that you know why dogs lick, you’re ready to become a responsible dog owner. Even if you don’t have a dog just yet and you’re in search of the ideal puppy, this kind of information is more than useful.

Social rules around dogs and puppies

Dogs live in human society as pets, so it’s essential we take precautions to teach them all the right [...]

Does your puppy have lots of friends already, or did you only just get a pup and then aren’t [...]

What does my dog’s barking mean?

Helping you work out what type of bark you’re witnessing is about context as well as sound pattern and [...]

Does your dog bark?

Does your dog bark? Is it embarrassing? Do you know why they're barking? Or is it just something they [...]